It has been 12 years since VNU-UET has accompanied many generations of Vietnamese informatics talents. We are honored to be the unit trusted by the Ministry of Education and Training to train and organize competitions for the Vietnam Informatics Olympic team in the 2nd national round as well as Asia Pacific (APIO) and International (IOI) rounds. 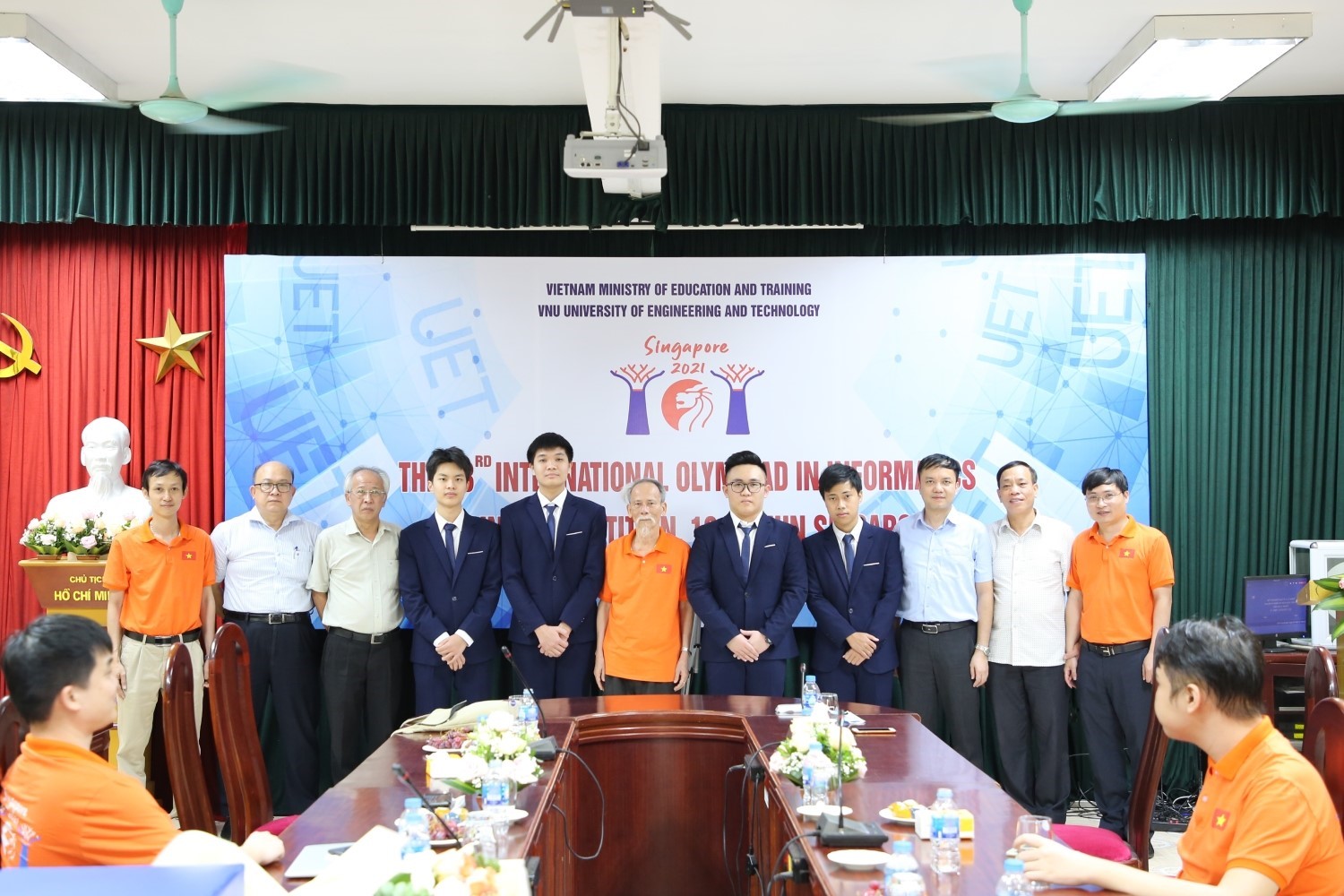 With the achievement of 110 medals from 1989 to now, the Vietnamese delegation is placed at the 7th rank and continues to be one of the top countries with the most number of IOI medals.

– VNU Newsletter: Opening the final round of the International Informatics Olympiad 2021

– VNU-UET Newsletter: Closing ceremony of the International Informatics Olympiad 2021 at the VNU-UET

On May 17, the UET Fastest team of the University of Engineering and Technology, Vietnam National University Hanoi (VNU-UET) excellently overcame 8 other teams to win the Champion of the 2018 Digital Race at the Tay Ho district gymnasium, Hanoi. 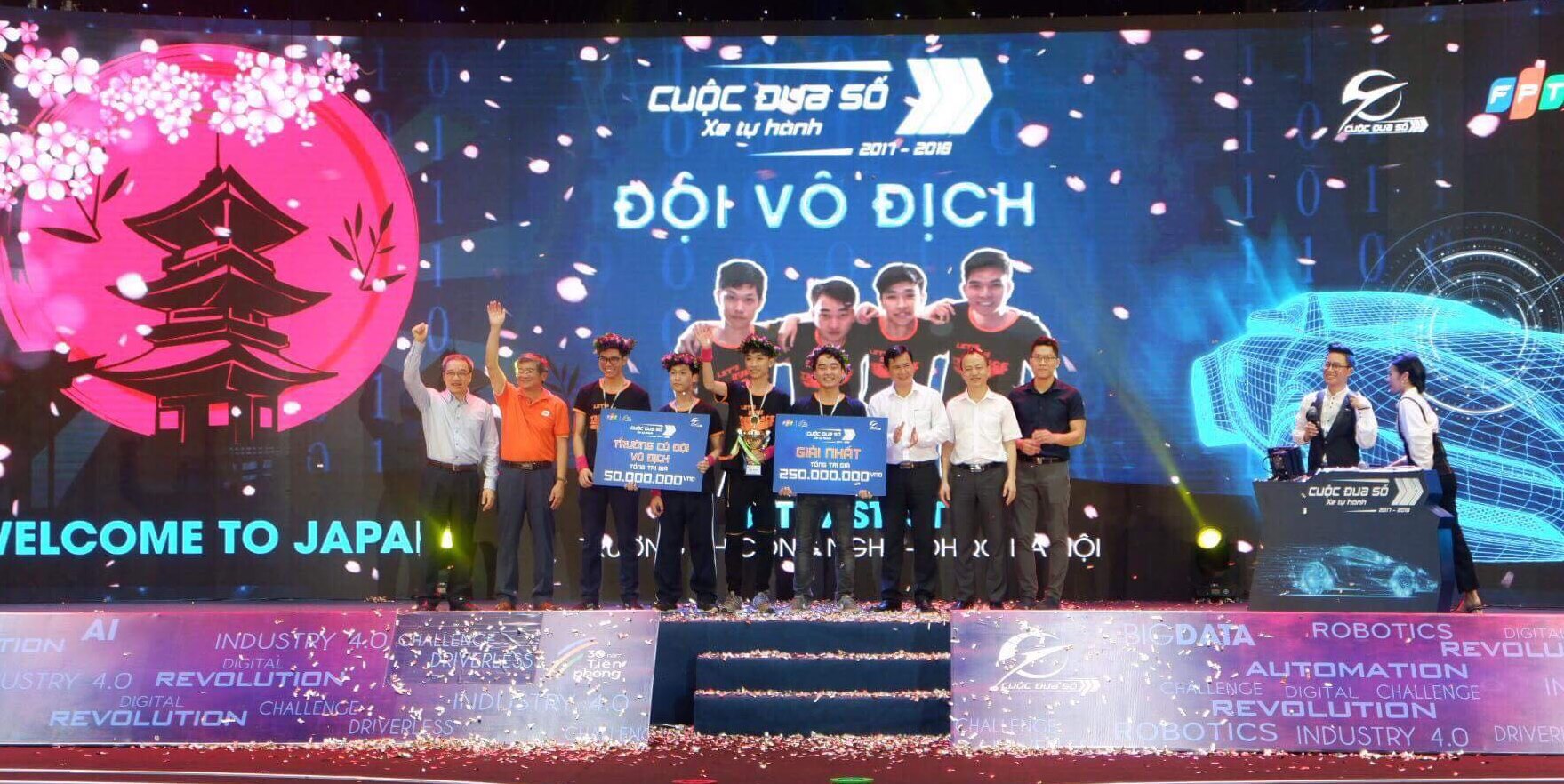 All 4 members of the team are excellent talented students of VNU-UET. Regarding their strategy in the semi-finals, UET Fastest shared, “First, you have to keep calm to complete the full racetrack, then speed up to shorten the running time, finish the race and win the competition”. Due to the lack of practice time, the members often had to use the day off or the evening to test algorithms. Furthermore, it was impossible to set up a training ground because of the limited space, hence they created a virtual racetrack on their computer. The members applied knowledge in programming, image processing, artificial intelligence to build a self-driving car with the highest speed and amazing features such as: the ability to identify and avoid obstacles on the racetrack, the ability to identify and move according to sign directions. This tactic helped the team to become the Champion at the 2018 Digital Race.

Nguyen Minh Chau, a member of the UET Fastest team said, “The school subjects are mostly theoretical. The digital race motivates us to learn more about new technologies such as image processing, deep learning, artificial intelligence, etc. Although we have only participated in a short period, we have some initial results on self-driving cars. Over the past time, the team focused on improving the image processing performance, and carefully calculating the vehicle’s acceleration to move better on complex terrain. We are confident that we can complete all the challenges given by the organizers.”

This year, the final round of the Digital Race having the topic of “Autonomous vehicle programming” are organized with 8 teams from 6 universities including: Proptype and Winwin Spiral teams from FPT University; UET Fastest team from VNU-UET; MTA_ Race4Fun team of the Military Technical Academy; DUT Stack and NII teams of Danang University of Technology; Sophia from University of Information Technology – VNUH; and BK-PIF team of University of Science and Technology – VNUH. These teams had to go through two rounds of competition. In the first round, 8 teams drawn to divide into 4 pairs. Each pair have to compete on the same two independent tracks. The 4 teams with the highest point, which is the shortest time to complete a complete lap, are qualified to enter for the second round. At the end of the first round, the four qualified teams are 1MTA, Proptype, Winwin Spiral and the UET Fastest team.
Despite being the fourth-placed team with the racing time of 31 seconds in the first round, in the second round, UET Fastest team excellently took the lead to win this year’s Digital Race Champion after defeating the Winwin Spiral team from the FPT university. 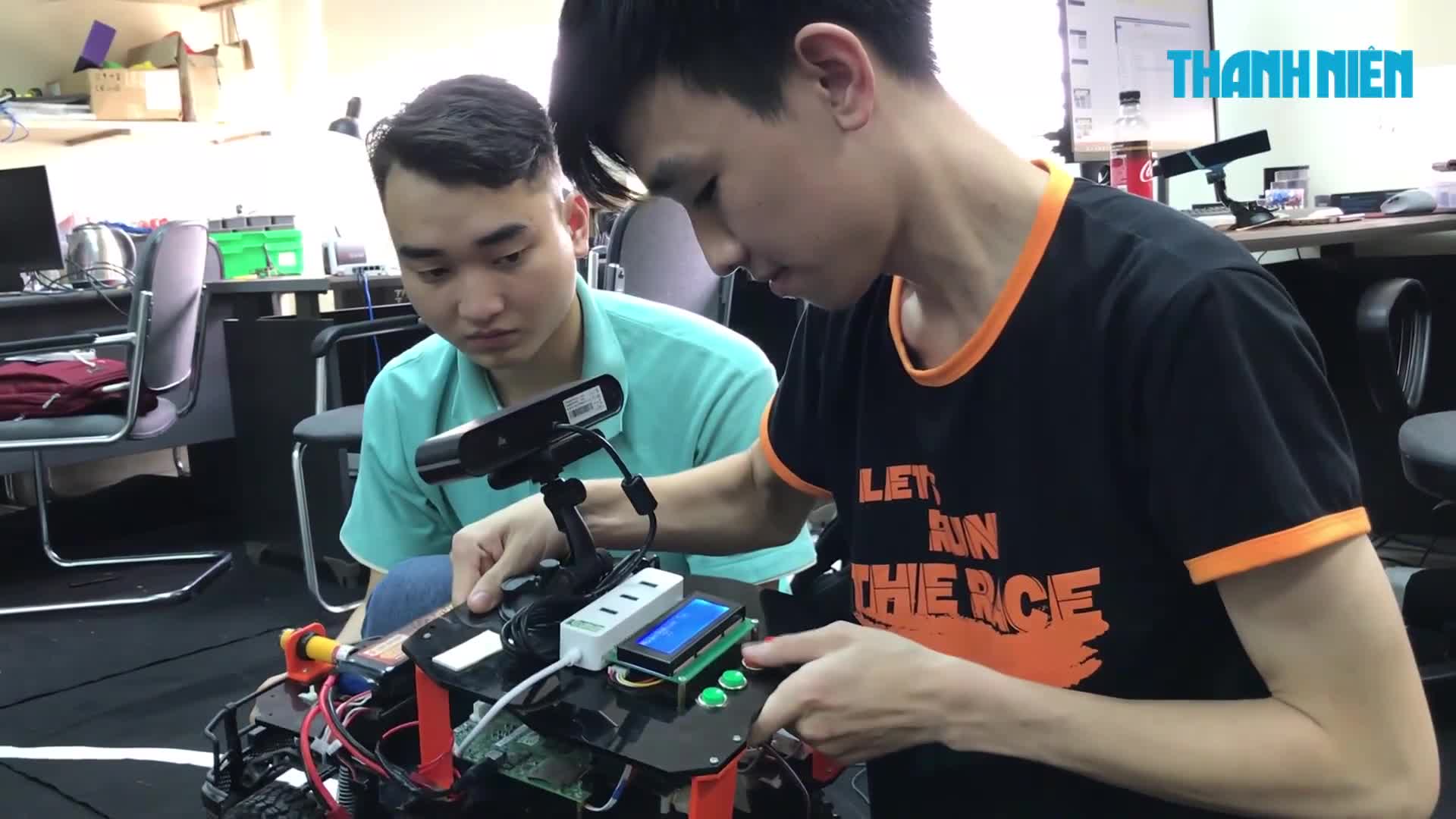 After 6 months of practice and competition at the 2017-2018 Digital Race, the teams have to gradually conquer technological problems of autonomous vehicles with increasing difficulty. At the beginning, the contestants have access to basic knowledge of image processing, artificial intelligence and then are guided to practice on a model car with the one tenth size of a real car.

In the semi-finals, self-driving cars were only capable of moving on lanes, identifying, and avoiding obstacles; identify and move according to sign directions. Interestingly, in the final round, the cars were able to travel on roads with complex terrain, e.g., rows of nails, dash lines or stop signs. In particular, the signs may automatically change randomly through each run to test the sign recognition accuracy of each team.

For four consecutive years, the University of Engineering and Technology, VNU has won the top prize in the ACM/ICPC International Student Programming Contest in Asia and entered the Global Finals. In 2017, the LINUX team of three members Pham Van Hanh, Nguyen Duc Duy and Phan Duc Nhat Minh, won the first prize of ACM/ICPC in Asia, then participated in the global final round held in the US and won 34th place over 128 participating teams. In the Asian qualifying round at Ho Chi Minh City from December 5-8, 2017, the Unsigned team won the championship and will be present in the global final round of the ACM/ICPC exam, which is held in Beijing in April 2018. In 2016, the BYTE team of 3 members Pham Van Hanh, Do Ngoc Khanh and Nguyen Tien Trung Kien, who won the ACM/ICPC Asia championship in Hanoi and the 2nd place in BangKok was selected to participate in the Global Final Round. They won the 29th place, which is the highest ranking of Vietnamese teams ever and brought Vietnam into the 14th place at the 2016 ACM/ICPC contest. In 2015, the Java# team of three members are Nguyen Duc Nam, Nguyen Phan Quang Minh and Do Xuan Viet, is the only representative of Vietnam to participate in the Global Final Round of the 2015 ACM/ICPC Global International Student Programming Contest won the 20th place in the total number of participating countries, which is the highest achievement ever for Vietnam in this competition. 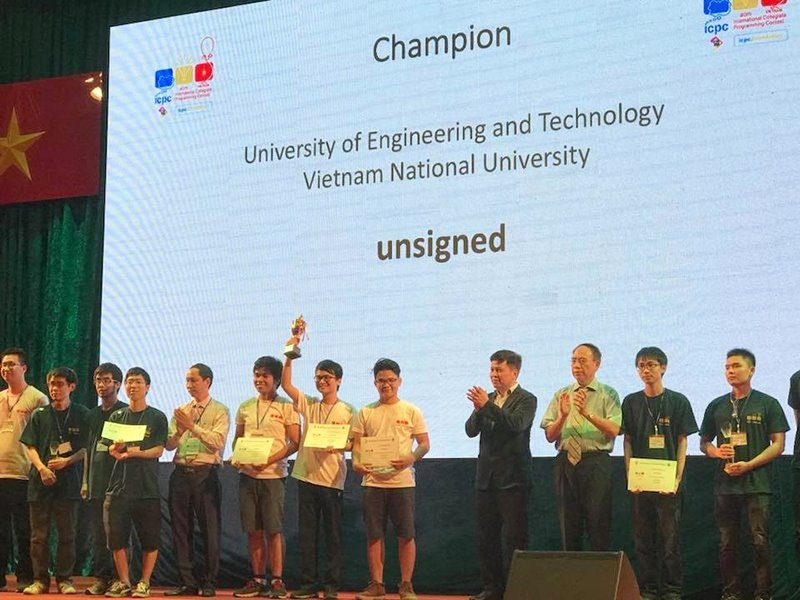 A support system to improve document quality” by a group of 3 main members Assoc. Prof. Pham Bao Son, Assoc. Prof. Le Anh Cuong, Dr. Vo Dinh Hieu won the second prize of the Vietnamese Talent Award 2017. DoIT provides two primary features: spell check and duplicate detection for Vietnamese documents. The system can support multiple types of such as doc, docx, pdf, ppt, etc. With the DoIT spell check feature, in addition to pointing out faulty words, it also suggests correct words to replace them. The duplicate detection feature will indicate whether the sentence/paragraph in the checked document is duplicated with the sentence/paragraph of the document contained in the system database. There are three levels of overlap, i.e., high, low, and medium, which are represented by three colors. Users can share and send documents through the system. Readers can try a demo at http://doit.uet.vnu.edu.vn or at http://doit.lic.vnu.edu.vn . 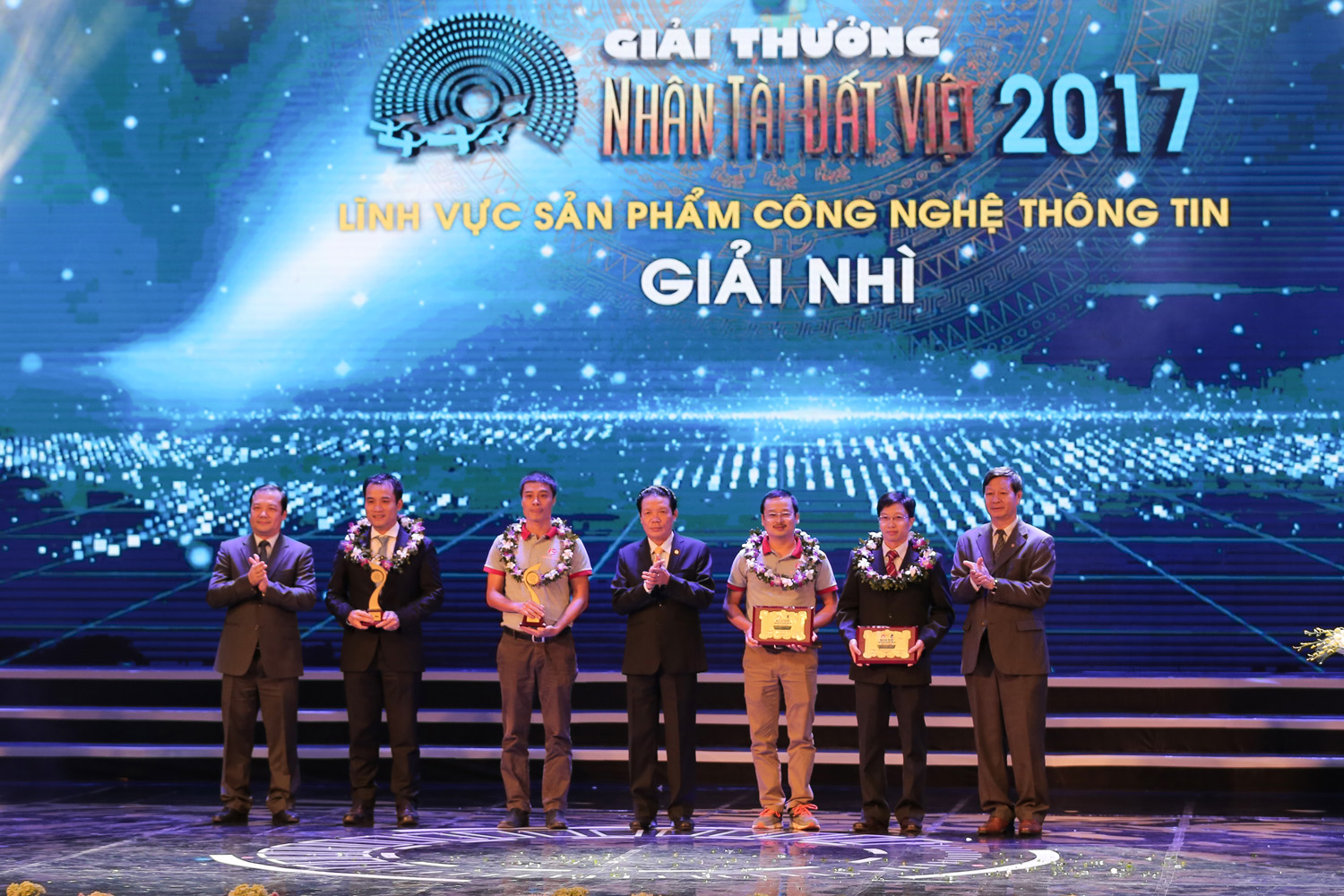 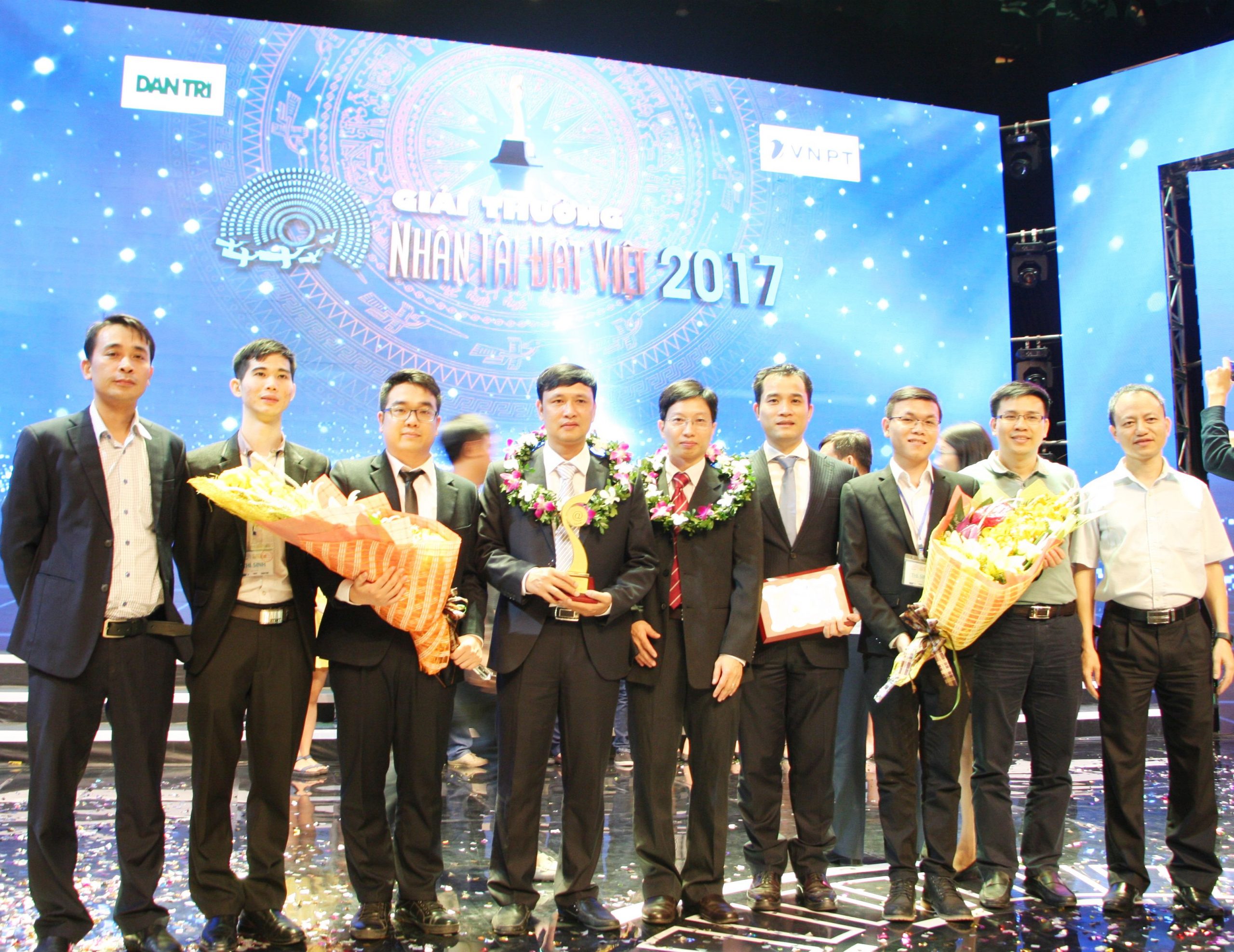 Dr. Ha Minh Hoang and student Pham Van Hanh are 2 of 9 individuals in Vietnam, who were awarded the Youth Science and Technology Award, also known as the Golden Globe prize in 2017. Since 2003, the University of Engineering and Technology has 11 people (7 faculties and 4 students) received this award. 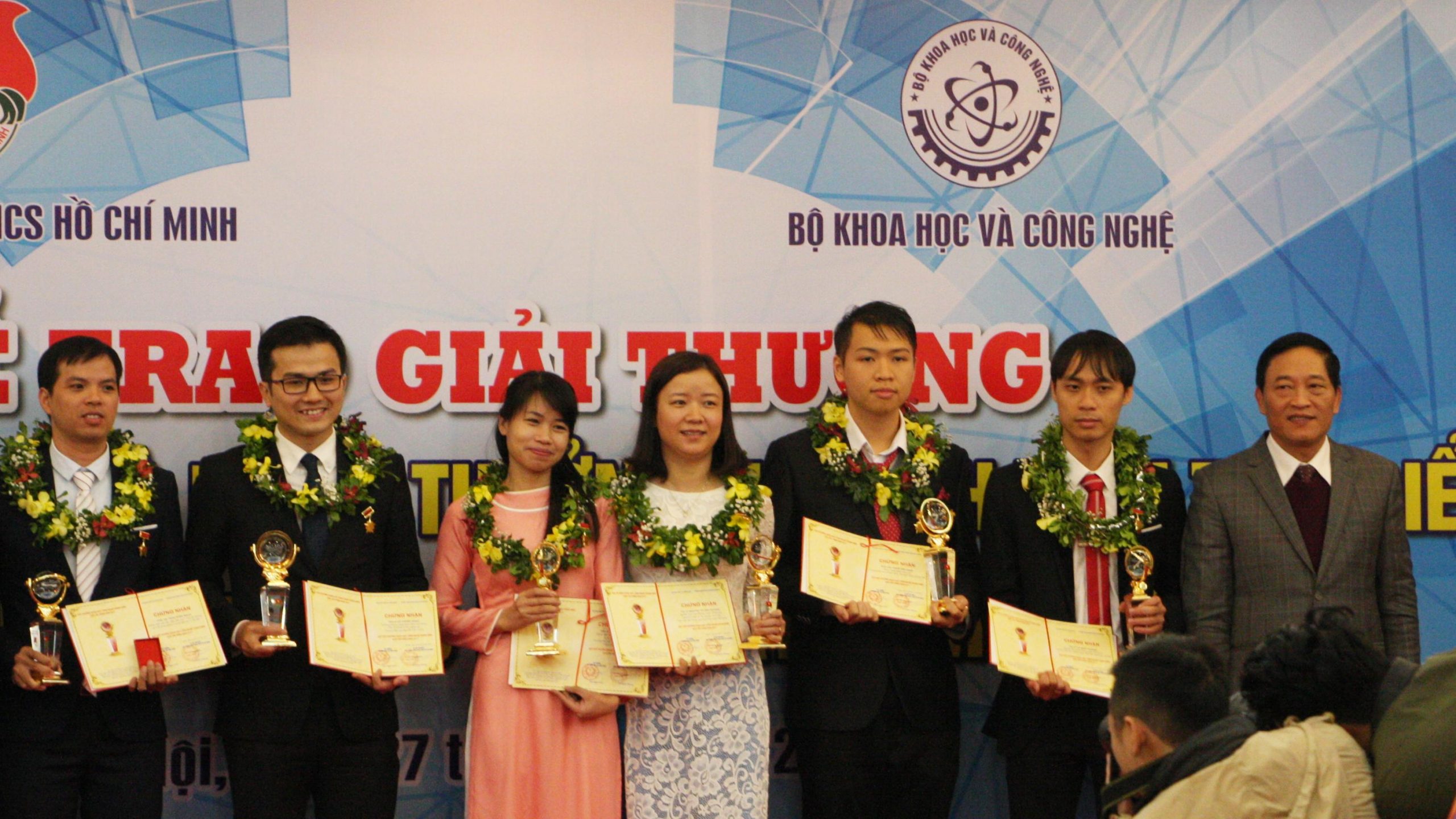 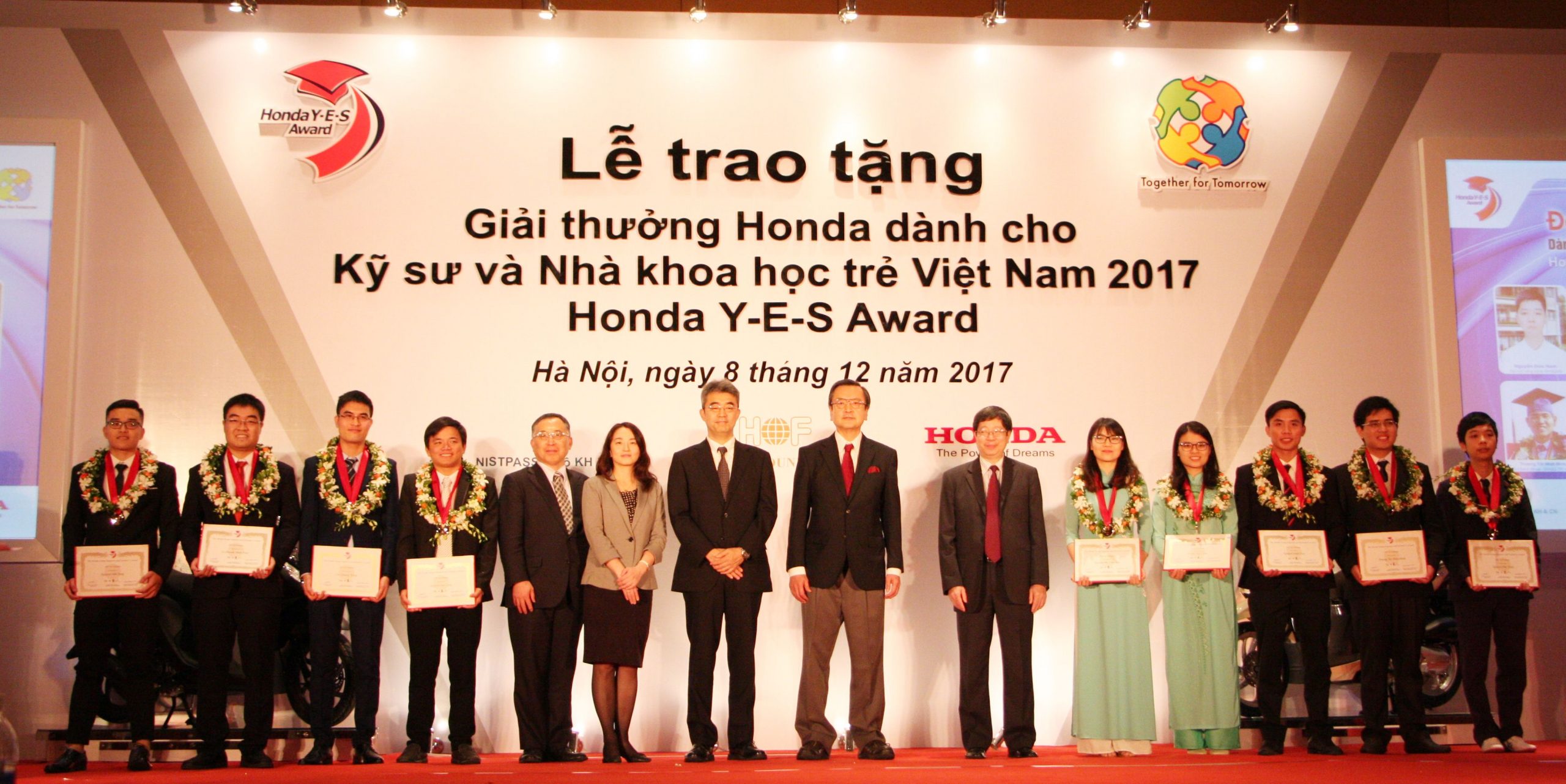 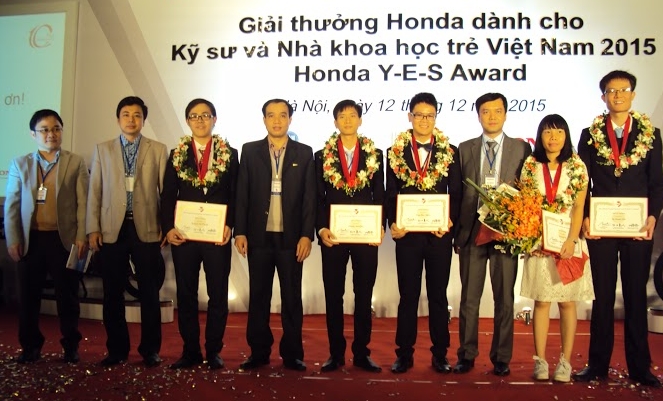 In October 2015, Honda Vietnam officially announced the top 10 outstanding faces to win the Honda Young Engineer and Scientist Award 2015. Faculty of IT is proud to have 3 students who won this award. This is the 2nd year in a row that 3 (out of 10) awards belong to our students. 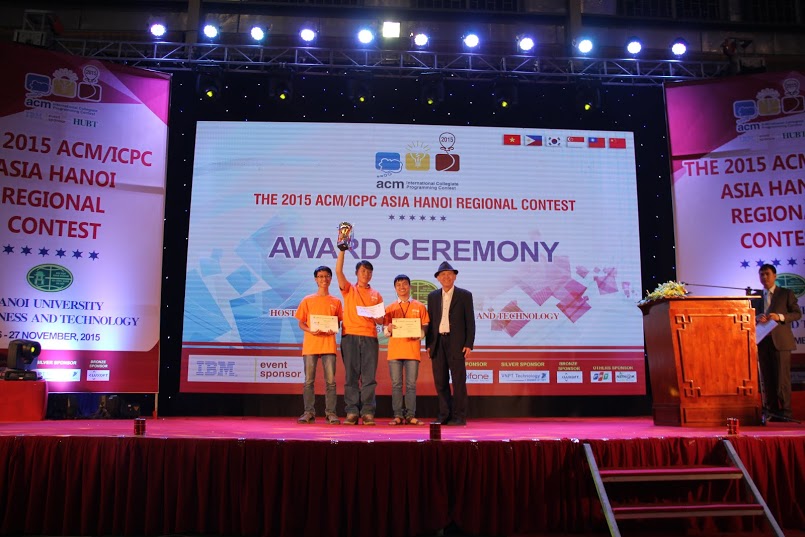 Solving 9 problems in 941 minutes, the BYTE team of three students Pham Van Hanh, Nguyen Tien Trung Kien and Do Ngoc Khanh from the University of Engineering and Technology, VNU has surpassed 110 teams of domestic and international universities such as the Ho Chi Minh University of Science, Taiwan International University, University of Science and Technology, FPT University, etc. to win the Championship cup. Additionally, they will enter the final round of ACM/ICPC which will be held in Phuket, Thailand on May 2016. The 6 other teams of VNU-UET also achieved high rankings as follows: BIT (3rd place), MEGABYTE (10th place), KILOBYTE (11th place), WORD (12th place), GEOPBYTE (16th place), GIGABYTE (22nd place). 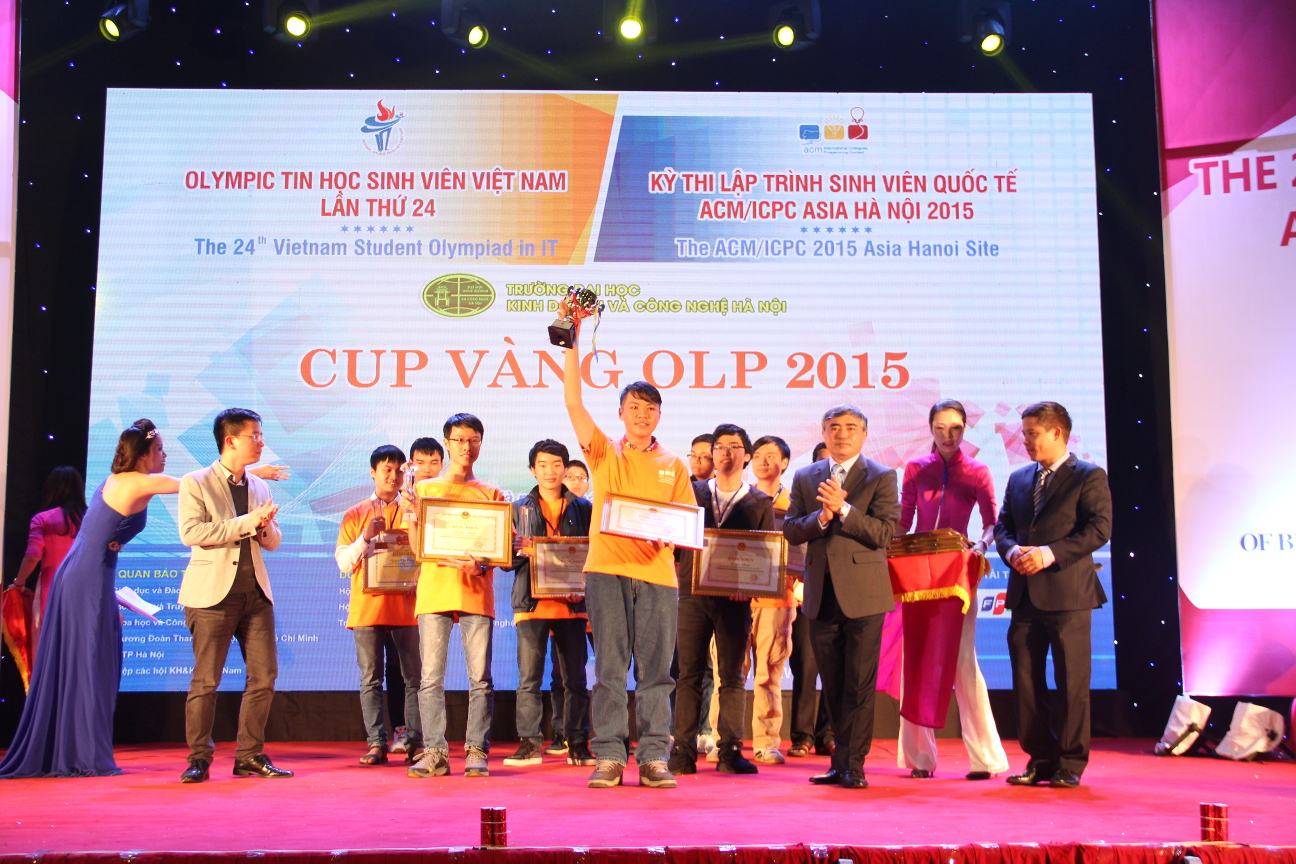 The Animal.Oh yeah (VNU-UET) won the second prize at the final round of the 2015 Student with Information Security competition held on November 14, 2015.
With 25,220 points, the team of four students Nguyen Huu Tung, Phan Xuan Tien, Le Van Giap and Do Quang Thanh surpassed the four other teams from University of Information Technology (VNU-HCM), Duy Tan University, Institute of Post and Telecommunications Technology, Hanoi University of Science and Technology to win the second prize in the final round. 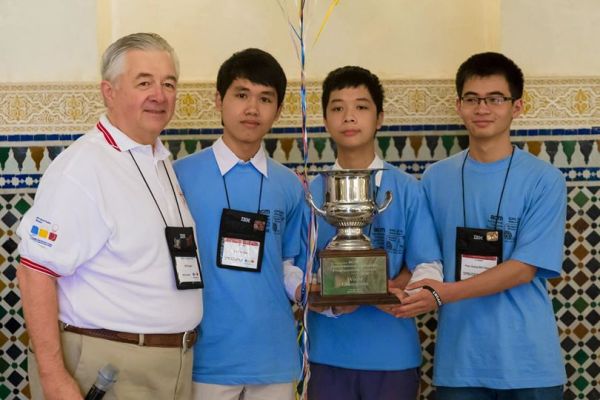 Team Java# from University of Engineering and Technology – VNU, the only representative of Vietnam to participate in the 2015 ACM/ICPC Global International Student Programming contest won made the highest achievement ever for Vietnam in this contest.
The ACM/ICPC 2015 contest attracts the participation of more than 4000 universities across all continents. After the regional rounds, 128 teams were qualified to the global final round on May 25, in Morocco. Solving 6 out of 13 problems, Java# team of 3 members Nguyen Duc Nam, Nguyen Phan Quang Minh and Do Xuan Viet took the 51st in the contest, which is the highest achievement ever for Vietnam. If the contest had a ranking for countries, Vietnam would take the 20th place.